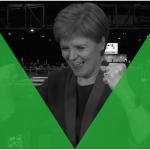 In June 2017, Northern Ireland Twitter’s interest in the BBCNI leaders’ debate peaked when DUP representative Jeffrey Donaldson held up a photograph of Sinn Fein’s Máirtín Ó Muilleoir meeting Ulster Defence Association leader Jackie McDonald. Clearly intended to deflect criticism that DUP candidates had been endorsed by loyalist paramilitaries, the incident garnered more attention from tweeters than the more pressing issues of Brexit and the collapse of the Stormont Executive in January 2017. There was much ridicule of Donaldson’s behaviour, in marked contrast to the praise for the SDLP’s Colum Eastwood and Alliance’s Naomi Long. Nevertheless, illustrating the limitations of using social media as a direct proxy for public opinion, the DUP went on to consolidate its position as the largest party in the region in the 2017 Westminster Election.

Fast-forward to December 2019, there appears little prospect of an agreement being reached to bring back the Assembly. Fears about the damage that a hard Brexit might inflict upon the region spurred parties such as the Greens, SDLP and Sinn Fein to create their own ‘Remain Alliance’, standing aside for each other in constituencies such as North Belfast and South Belfast in order to maximise the number of pro-Remain MPs. All were critical of the DUP’s confidence and supply agreement with the outgoing Conservative government, as well as their support for Brexit. I set out to examine whether these issues were given greater prominence during the 2019 debate held on 10 December, which saw Eastwood, Long and Donaldson (again deputising for Arlene Foster) joined by Sinn Fein’s Michelle Foster and the recently appointed Ulster Unionist leader Steve Aiken. TAGS was used to collect 1875 tweets posted between 9-11 December tagged #bbcnidebate. As per the 2017 debate, the vast majority were retweets (70.13 percent) with only 42 @replies between tweeters (2.24 percent). However, this time Northern Ireland Twitter appeared to focus more on how each representative addressed the key issues of Brexit and the need to get the power-sharing institutions up and running again.

A preliminary analysis of the top 10 most retweeted posts (shared 410 times) revealed that all of them focussed on Brexit with many blaming the DUP for the crisis. Three of these were posted from O’Neill’s personal Twitter account, containing short video soundbites from her contributions to the debate reiterating her party’s desire to restore the Executive and for Irish unity. For example, the most retweeted tweet in the corpus (shared 70 times) saw her chide Donaldson that Westminster had never served Ireland’s interests and encourage voters to “reject the toxic politics of Brexit- embrace the politics of hope, progress and unity”. However, O’Neill was not immune from criticism on the hashtag, as demonstrated by a tweet from Irish News journalist Suzanne Breen noting that she had become “embarrassingly unstuck” arguing that Sinn Fein’s abstentionism from Westminster had made no difference on Brexit. The party was also attacked by the SDLP for “claiming £5 million pounds in expenses over 9 years” while maintaining this policy, with a video of MLA John O’Dowd shared to illustrate their opposition to Northern Ireland receiving special status in any Brexit agreement. Elsewhere, the Alliance Party were responsible for three of the most shared tweets; these included Long’s criticism of the crises in the NHS and schools and blaming the DUP for the potential border in the Irish Sea caused by Brexit. Overall, there was a conspicuous absence of support for the DUP amongst the tweets most heavily retweeted during the debate.

There are of course a number of health warnings that come with these preliminary findings. First and foremost, popularity on social media does not automatically translate into votes. Northern Ireland Twitter constitutes a small but highly engaged segment of the total population rather than its mirror image. Second, the use of party accounts to share edited clips of the leaders’ debate illustrates the increasing sophistication of their digital campaigns. There is already some evidence that parties such as Sinn Fein are mobilising supporters on sites such as Twitter to drown out critical voices and promote campaign messages. Therefore, it is reasonable to presume that many of those sharing those ‘dual screening’ the debate were already members or supporters of these parties, not undecided voters. While this might have been the most ‘digital’ election campaign in the region to date, issues such as Brexit and the NHS crisis were more likely to have influenced the voting behaviour of Northern Irish citizens during the 2019 Westminster Election.