Lecturer in Media Policy at the School of Media and Communication, University of Leeds.

The BBC Question Time programme on 30th April was applauded by commentators for finally letting the public into the election campaign. Jonathan Freedland writes that, “After a campaign lamented for its sterility, vacuum-packing the leading candidates in airless rooms a safe distance from the voting public, the BBC Question Time special forced the men who would be prime minister to face the electorate at last”. But for some time it wasn’t clear whether televised debates involving the leaders or similar programmes would go ahead at all, as the broadcasters and political parties wrestled over the details of the debates in a series of private negotiations. When debates are presented as an opportunity for the public to hold their political leaders to account, it seems perverse that it is up to political leaders to decide whether the debates go ahead and on what terms. But then if election debates were to be designed from the perspective of the public, rather than political parties or indeed media organizations, what might they look like?

Building on a study of the 2010 debates (see Leaders in the Living Room), we’ve been conducting research to examine what citizens themselves want from televised debates and how effectively their needs are being met. Through a series of deliberative focus group with voters ahead of the election, and drawing on the capabilities approach developed by Amartya Sen, Martha Nussbaum, and others, we’ve identified five key democratic capabilities that we argue citizens are entitled to expect televised debates to enhance (see What do Viewers Want from Televised Election Debates?). Citizens want election debates to be designed in ways that can help them to: (1) be rational and independent decision-makers; (2) evaluate political claims and make informed decisions; (3) be part of democratic cultural events; (4) communicate with and be recognized by the political leaders who want to represent them; and (5) make a difference to what happens in the political world. In two concurrent studies, we’re examining the extent to which these democratic capabilities have been enhanced by the 2015 televised election debates and exploring how they could be strengthened in future.

Our first study investigates the views of the public about the 2015 election debates through three surveys with representative samples of voters ¹. Like the 2010 study (Leaders in the Living Room), the aim is not to determine ‘Who Won?’ (the question which dominates much journalistic commentary), but to evaluate the systemic implications and effects of the debates for voters as democratic citizens. In particular, the study will assess how effectively the debates measure up against our five key democratic capabilities and explore disparities among groups. Our findings will be published later this year and we expect to have interesting things to say about the different ways in which those aged under 30 watched the debates compared with other viewers.

Our second study is exploring how the democratic capabilities can be enhanced through the imaginative use of digital media ². We’ve assembled a multi-disciplinary team of researchers from the University of Leeds and the Open University, involving specialists in information science and design as well as political communication, to develop a platform to replay the debates that allows both citizens and political analysts to experience and evaluate the debates in new ways. Democratic Replay includes a range of forms of data analytics and visualization, from fact checking and argument maps to social-media analytics. We’ve also designed a new app for citizen feedback called Democratic Reflection(see screenshot opposite), which we tested with a panel of voters during the televised election debates, which asks respondents to evaluate the debates in terms of their democratic capabilities and so provides a more sophisticated way of judging the democratic quality of the debates than blunt instruments such as ‘the worm’.

This was an election campaign characterized by a plethora of televised debate formats. The question of how far these media events shaped public thinking and enhanced democratic capabilities is our key focus for research. According to David Cameron, the 2010 debates ‘sucked the life out’ of the campaign. It will be interesting to explore whether the 2015 debates added to the sterility and risk-aversion of the stage-managed campaign that Cameron seemed to want – or breathed some democratic life into it.

1 This project is being undertaken in collaboration with Professor Jay Blumler at the University of Leeds.

2 This project is being undertaken in collaboration with Dr Anna De Liddo, Dr Brian Plüss, and Harriett Cornish at the Open University and Dr Paul Wilson at the University of Leeds. 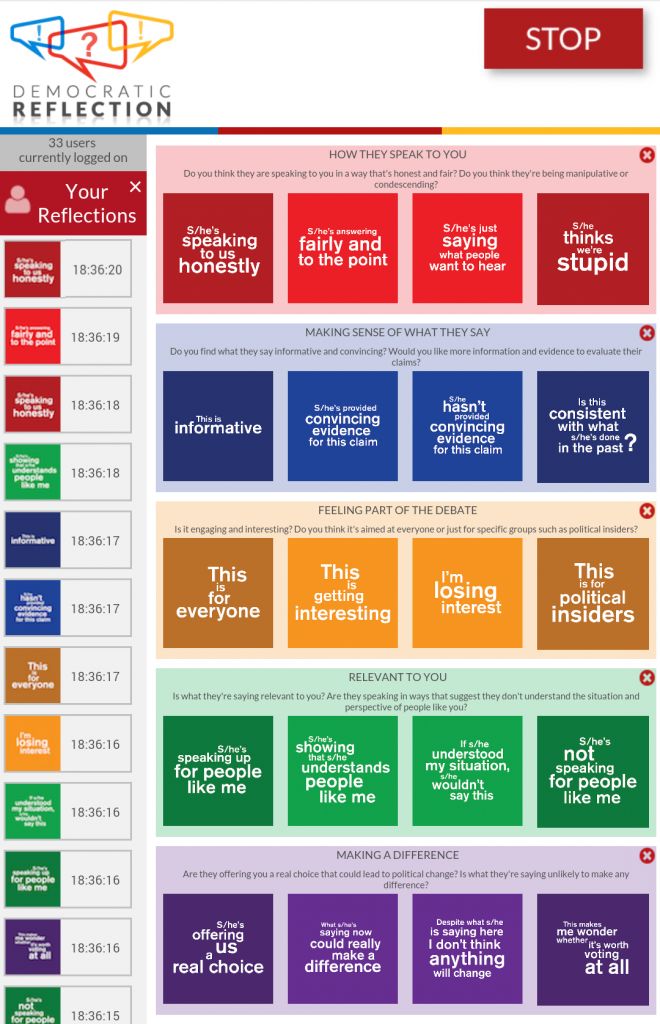