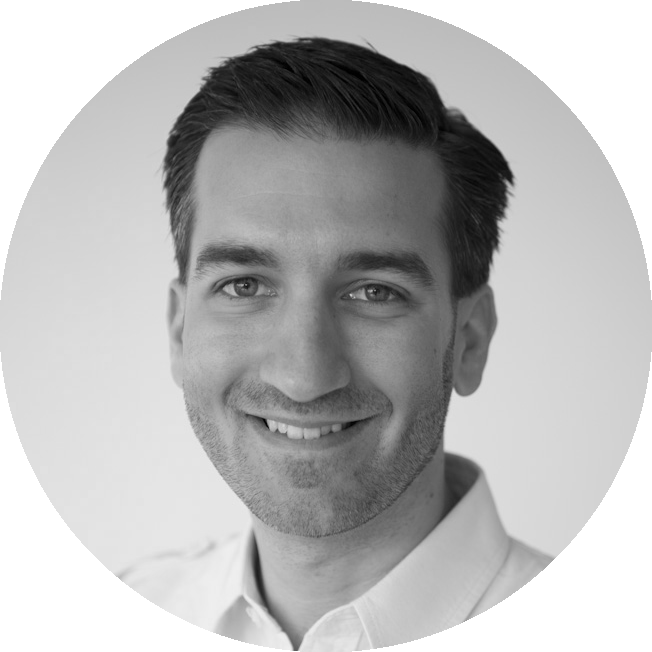 Post-doctoral researcher at the University of Glasgow.

In summer 2015 he will join American University’s School of Communication in Washington, DC as Assistant Professor of Public Communication. 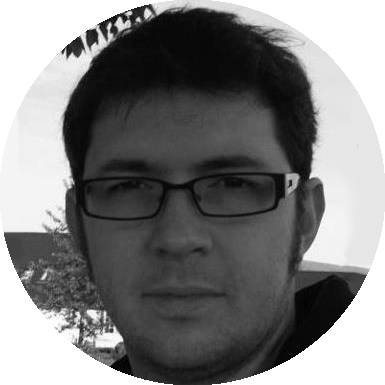 Lecturer in Media and Communication at the University of Leicester.

One of the defining characteristics of the 2015 UK General Election was the use of social media to build support for the Conservatives and Labour in the run up to what was widely (and inaccurately) predicted to be the closest electoral contest for decades. This consisted of both positive messages, such as the use of #Milifandom to indicate support for Labour Leader Ed Miliband, and negative ones, such as the US-style attack ads suggesting that the Scottish National Party would exert undue influence on any Labour-led coalition that emerged after the election. There was also some evidence to suggest that online media might disrupt the established broadcast and print journalism during the campaign. Most notably, Ed Miliband’s interview with Russell Brand for The Trews, the comedian and activist’s YouTube channel, was viewed more than 1.2 million times in the week before polling day. This prompted much debate in the news media about whether such “alternative” online platforms might help the main politicians reach out to young people who often choose not to vote and consume media in very different ways from older generations.

UKIP may be slowly shedding its tag of being a “personal party,” unlike other populist and euro-sceptic forces in Europe such as the Five Star Movement in Italy

Smaller parties are likely to benefit from online exposure, especially given that they often lack visibility in the traditional news media. Besides social media, search engines such as Google have a crucial role in this process as they represent the primary channel through which people in the UK access online content (Dutton and Blank, 2013). We used Google Trends to explore the level of interest among British Internet users in the populist United Kingdom Independence Party (UKIP), which had finished in first place in the 2014 European Parliament elections and looked set to build on this landmark result in 2015. We analysed the search trends between February and May 2015 for UKIP and its leader, Nigel Farage. These trends were then compared to those relating to the three main parties (the Conservatives, Labour and the Liberal Democrats) and their leaders1.

While UKIP received much less coverage in traditional broadcast and print media than the other parties, Farage’s party dominated Google searches, consistently generating more search queries than all the other parties and their leaders throughout the campaign (Figures 1 and 2). This would appear to validate Farage’s post-election claims that the party was a social media force that had “suddenly [become] the party for the under 30s,” a group that is perhaps best reached online. Moreover, while TV debates continued to influence Google searches in elections (especially on 26nd March, 2nd and 16th April), most search peaks did not appear to be directly related to such mass media events. One interpretation of this finding might be that a more independent-minded electorate is emerging that sets its own information agenda instead of simply following traditional news coverage. However, the protracted negotiations over the number, format and composition of the TV debates almost certainly played a part here too. 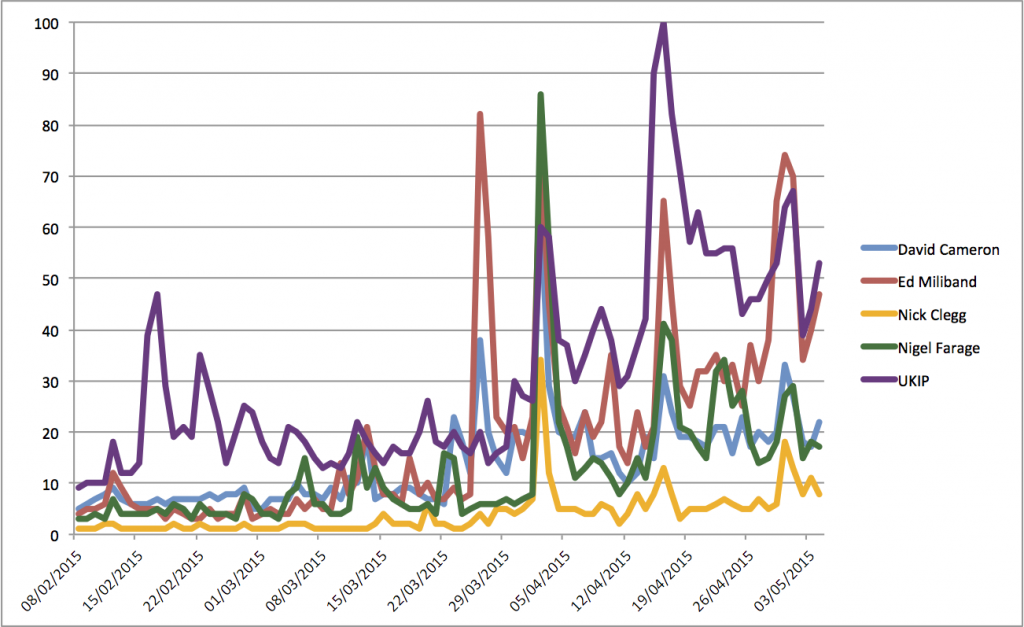 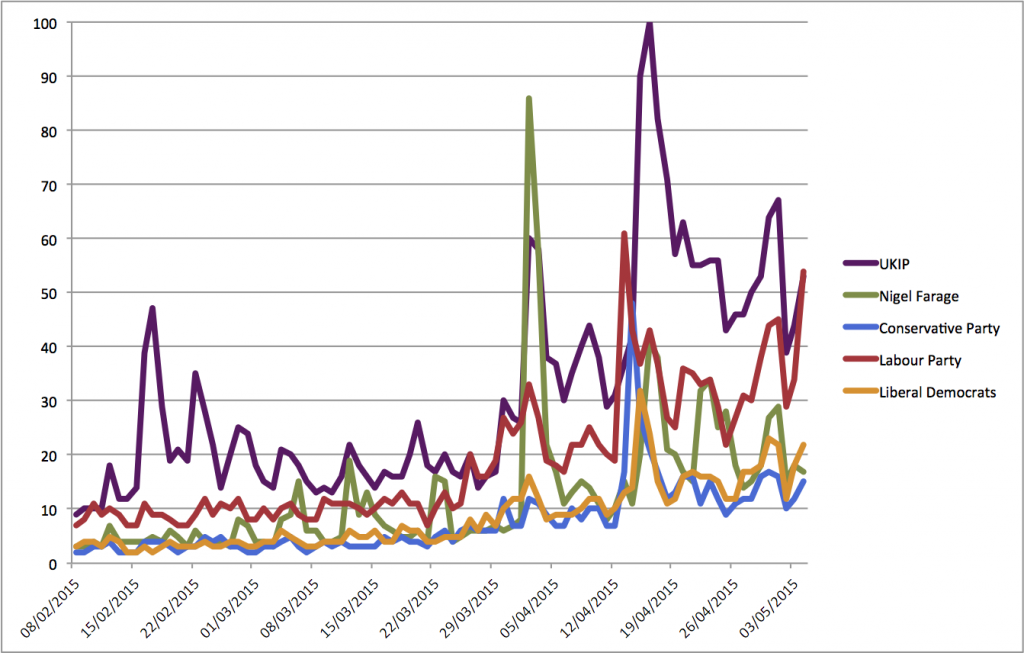 Crucially, UKIP appeared to generate more interest amongst British Google users than any of the party leaders, including Farage. Although this focus on UKIP as a group may seem at odds with a political system that is increasingly leader-focused, as well as with Farage’s own flamboyant style, it suggests that UKIP’s strength among Internet users lies in its collective “brand.” For example, Google searches for UKIP at the time of the BBC leaders’ debate (26 April) far outnumbered those for its leader. This suggests that UKIP may be slowly shedding its tag of being a “personal party,” unlike other populist and euro-sceptic forces in Europe such as the Five Star Movement in Italy. This was further illustrated by UKIP’s performance in the 2015 General Election. Despite delivering only one seat due to the first past the post system (which incidentally also shows how Google Trends data may be a very poor predictor of election results), the party received 3.8 million votes across the UK and achieved 119 second places in England. This best ever performance in a Westminster Election did not prevent the resignation of Farage as leader shortly after his failure to win in Thanet South, although he has since refused to rule out running for the leadership again. Yet, irrespective of the identity of the next leader, UKIP’s focus on issues such as Europe and immigration looks likely to resonate with wired voters (and non-voters) in Britain.

*1 Due to the need to exclude election day from the data given its nature as a potential outlier, this analysis covers the period up to 4th May 2015.