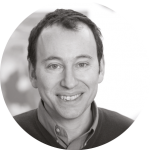 Over the past 20 years, we have witnessed a sharp decline in youth participation in general elections. 60% of 18-24 year olds voted in the 1992, compared to an average of 40% over the last four polls. As the graph below shows, the gap between youth and overall turnout has increased significantly during this period.

young people were energised by Brexit, Jeremy Corbyn, and the clear ideological divisions between the Labour and the Conservative Party

However, there is overwhelming evidence to show that young people are interested in ‘politics’ (more broadly defined) and engage in a whole multitude of civic and political activities: from demonstrations against university tuition fees, to the boycotting of products that damage the environment, to campaigns against the closing of parks or youth clubs in local communities. So, young people are often interested in, and engaged in, key issues, but have for many years been put off by politicians and political parties.

This was illustrated by the 2016 referendum on British membership of the European Union, when an estimated 60% of 18-24 year olds turned out to vote on this issue of concern. But most young people were disappointed by the result. Around three quarters of this age group (and 82% of university students) voted for the UK to remain in the EU.

It is nevertheless clear that the gap between youth attitudes and those of older voters has grown: from the Iraq War, to student tuition fees, to immigration, to Brexit. Indeed, the Labour Party under Ed Miliband managed to increase its share of the vote amongst 18-24 year olds in 2015, while losing ground amongst older cohorts.

One of the main surprises in 2017 general election was the strength of turnout amongst younger voters. A YouGov survey released on 13 June, estimated that 57% of 18-19 year olds and 59% of 20-24 year olds took part in the poll. Constituency results also show that the swing to the Labour Party was significantly higher in areas with relatively young populations.

Data from a Populus survey, which I helped to design (commissioned by Bite the Ballot and Freud), showed that young people were engaged. 18-24 year olds were more likely to vote in the 2017 general election than they were at a similar stage before the 2015 poll: 57% stated that they were certain to vote (a month before the election) compared to 46% two years ago. 18-24 year olds were actually as likely to vote as 25-34 year olds and 35-44 year olds (though still well behind the over 45s – of whom around 80% were certain to vote).

The same survey suggested that young people were energised by Brexit, Jeremy Corbyn, and the clear ideological divisions between the Labour and the Conservative Party. 81% of 18-24 year olds claimed that they were following the general election closely, compared to an average of 80% for all age groups (only topped by the interest of the over 65 age group). Furthermore, 88% of 18-24 year olds stated that they were following Brexit negotiations closely – more than any other age group!

Younger voters were following the general election and Brexit negotiations much more closely than the most popular entertainment programmes: 34% for Game of Thrones and 32% for Britain’s Got Talent. These figures illustrate that the popular claims – that younger citizens are apathetic about and uninterested in politics – yet immersed in their own leisure pursuits – are plain wrong.

Although we cannot say for certain that the EU referendum encouraged young people to engage more actively in the general election, we can say that those who supported Remain in last year’s poll had a very similar demographic profile to those who voted for Corbyn: young, highly educated, and supportive of cultural diversity in Britain. According to ICM, 75% of 18-24 year olds who voted Remain, voted for the Labour Party.

Young people were clearly attracted to Corbyn’s perceived authenticity and policy program, but this was a two-way street. In 2017, the Labour Party appealed directly to this demographic through proposed investment in education (including, the abolition of university tuition fees) and housing, and guaranteeing workers’ rights. By contrast, there was little for young people in the Conservative Party manifesto beyond vague references to intergenerational justice.

These differences in emphasis on age cohorts in party manifestos, was reflected by unprecedented differences in support for the two main political parties amongst younger and older citizens. According to Lord Ashcroft Polling on 8 June, 66% of 18-24 year olds (who expressed support for a political party) intended to vote Labour, compared to 38% nationally and only 23% of over 65s! On the other hand, just 18% of 18-24 year olds supported the Conservative Party, compared to 58% of over 65s. The Figure below illustrates how the gap between youth support for Conservatives and Labour has widened dramatically since 2010 to a level unseen in recent political history.

In 2017, younger voters were politically energised by Jeremy Corbyn’s Labour Party. In an echo of the 1960s, young people expressed themselves as (in Inglehart and Norris’ terms) left-of-centre cosmopolitans, reacting both to austerity politics and the cultural conservatism found in older generations and embodied by the Leave campaign in the EU referendum. The Conservative Party will need to take note of these developments if they are to building a majority in future parliaments. 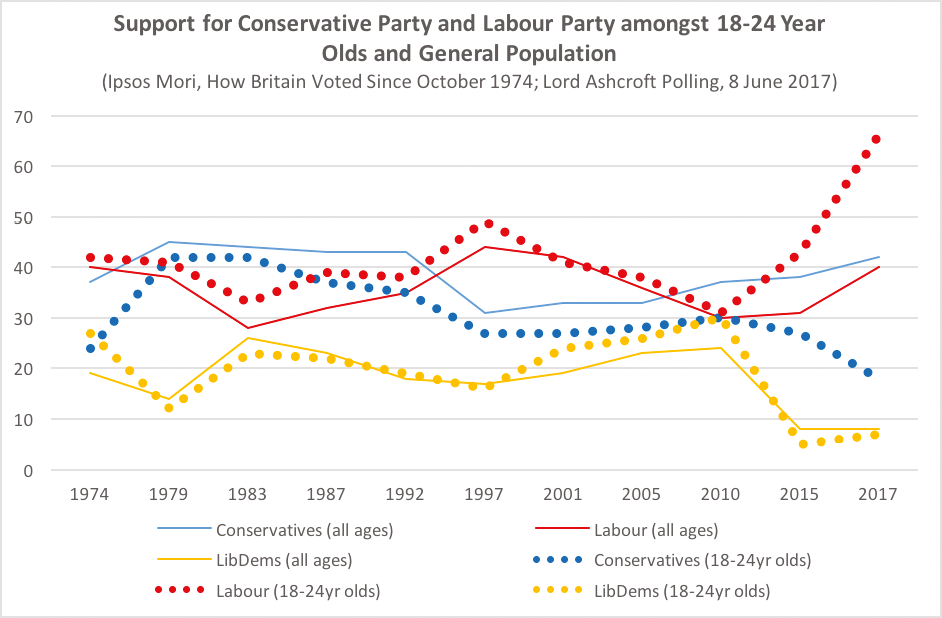